In effort to give back to the community, Hard Yards will be hosting a yearly racing series. You simply show up, race, and have a great time. For the competitive athletes, all the races will have assigned points for overall position. At the end of the year there will be a Hard Yards championship race were athletes will be crowned Hard Yards champion and Hard Yards series champion. Stay till the end for our awards party, were sponsors Polar, Drip Drip, Sizzlefish, Nuttzo, Enduropacks, and more give us free goodies to hand out.

The run series will consist of a 5km run which will loop around Steiner Ranch with the map shown below. We will also be introducing a 1 mile running race for any youngsters looking to dive into fitness or any track athletes locally wanting to test their fitness.

Each of our races will award points to the top 10 finishers. Throughout the year we will have a points champion and  a world champion and our championship event. Points are broken down as follows. 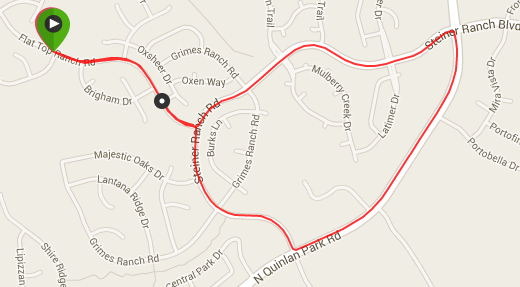